HBP is thrilled to be the recipient of the 2020 PGAMA Grand Q Award, for production of the Apollo 11: To the Moon and Back Commemorative book.  The Grand Q Award is the “Best of Show”, selected from hundreds of entries submitted by print and finishing companies in the Mid-Atlantic region.   The Printing and Graphics Association Mid-Atlantic’s Excellence in Print Awards are held annually to showcase and recognize excellence in printing execution in our region for all types of print production work.

In addition to the Grand Q Award, HBP received three Best of Category awards for this same project in the Case Bound Books, Finishing/Binding, and Impossible Job categories. HBP was also recognized as category finalists for other projects in 11 additional categories. 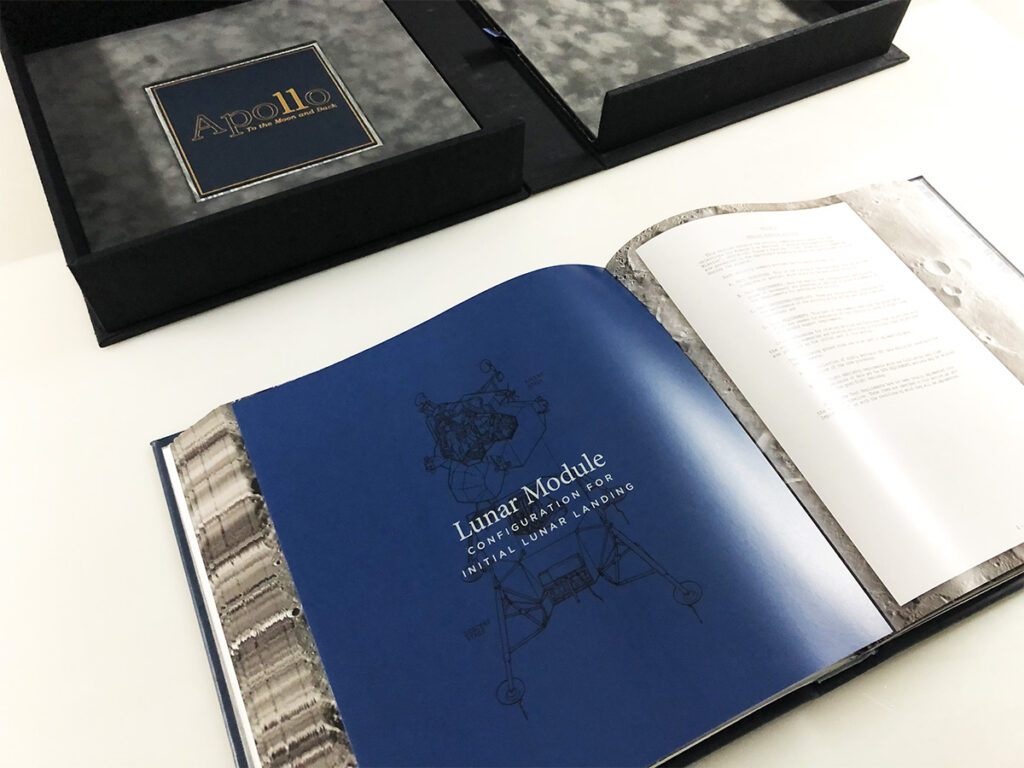 We are proud of our achievements, and our team at HBP who achieve excellence every day!

The uniqueness of this publication was that it represented the Fiftieth Anniversary of the first manned mission to land on the moon. The first steps by humans on another planetary Body were taken by Neil Armstrong and Buzz Aldrin on July 20, 1969. Apollo 11: To the Moon and Back is a limited-edition reproduction of the original Apollo 11 Flight Plan, the document that Neil Armstrong, Buzz Aldrin, and Mike Collins, and the entire mission control team in Houston used to plan and execute our first mission to land on the moon.

This in-flight road map to the moon, the Apollo 11 Flight Plan laid out every step of the 8-day, 3-hour, 18- minute, and 35-second mission resulting in the first human exploration of the lunar surface.

Once the actual flight plans and other historical documents were obtained from the National Archives, design of 438 pages plus 6 tip-in illustrative technical drawing inserts began. This was a very time-consuming process to maintain the historical accuracy of the event.

The run on this project was limited to 500 copies, with each cover made from Italian Leather and 23 karat gold. Custom made hand-painted embossed original end leaves as space inspired art, “Apo11o: To the Moon and Back” comes in an archival clamshell box emblazoned with a 23-karat gold emblem based on the eagle design of the Apollo 11 mission pack.  A special section under the book carries a loose custom printed giclee fine print original image ready for framing.

The entire binding project and clamshell box were produced by hand at Book Arts in Washington DC. A team of artists, printer, leather artisans and bookbinders worked together on a tight schedule. What made this project unique and almost impossible was that the majority of materials used had to be custom made.

Contact Us
Resource Room
Request a Quote
Upload a File

Any cookies that may not be particularly necessary for the website to function and is used specifically to collect user personal data via analytics, ads, other embedded contents are termed as non-necessary cookies. It is mandatory to procure user consent prior to running these cookies on your website.